From her far corner of the cabin, Leta glimpsed the side of Fiearius’ face and the broad smirk that arrived on it. “That’s what I thought,” he said, satisfied. “Route all the power we can spare out of the engine and into shields.”

“Just fucking do it, Cyrus,” he snapped, and with a growl in his throat, he pulled the gear into the sharpest swerve yet. Now, the view of the bay window shifted in a flash as the Dionysian was spun directly around 180 degrees. Now the ship faced the blurry blue-green mass of a planet and, in the foreground, the six fighter ships.

Leta anticipated every excruciating second of the impact. She squeezed her eyes shut and, below, her chair went from humming, to vibrating, to positively shaking in protest beneath her grip. Through the slits of her eyes she saw the silhouette of Fiearius, and beyond him, the peak of the Dionysian break through the fleet, a half-dozen silent explosions in the darkening sky as the walls roared and roared around them.

Dimly, Leta thought she could see, now, how this might be satisfying, in a terrible, destructive, awful sort of way. Even with the grimace masking on her face, she glimpsed one the metal sheets imprinted with the Society symbol blast apart as easily as beach-glass. It flew past the window of the ship and was lost, lost into the black of space.

The moment of peace was short-lived.

Easing her eyes open fully, Leta realized three things just as the cabin swam into view. First, the walls had slowed their shaking. Second, Fiearius was laughing like somebody had just told him a particularly off-color joke.

And the last thing she noticed was her stomach. It was lodged somewhere in her throat.

Hands shaking, body trembling, Leta fumbled to pull the seatbelt off her waist and pushed herself to unsteady feet. Her legs wobbled as she crossed to the door and staggered out of the cabin into the hallway. Behind her, dimly, she heard raucous yelling echoing from one end of the ship. It must have been the crew. Celebration, perhaps? Or perhaps, pain from that impact.

She picked the other direction.

The grated metal floor was rocking up and down like a boat on water and the air was as thick and heavy as she staggered forward. The pit in her stomach was not shrinking, but growing and growing, and before she could think to do otherwise, she stopped short, she grabbed the nearest railing and her mouth filled.

It was too much. 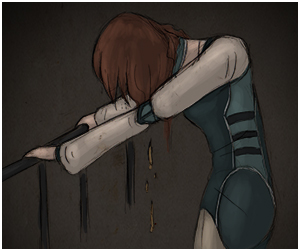 Behind her, as her senses returned, she heard the approach of forceful, pounding footsteps. Cyrus, she realized, as she glanced with streaming eyes over her shoulder and the young man stalked past her in a furious rush toward the bridge.

Seconds later, just as Leta was shakily wiping her mouth with her wrist, the hallway near the bridge erupted in shouting. It was undeniably Cyrus’ voice that yelled, probably at his brother, “What the fuck was that?!”

Leta straightened herself up and watched as the party of three — Fiearius, Cyrus and Corra — exited the bridge. Something of a swagger was in Fiearius’ walk while Cyrus followed, muttering darkly behind him, “You are damn lucky our shields held. They’re meant for minor debris or stray rocks. Not for high-class fighter ships moving forward at full sp– “

“But it did work,” Fiearius replied, smiling.

“Do you know what it means to have a hole in your ship at a hundred twenty thousand feet?!” Cyrus yelled, tossing his hands in the air. “‘Cause I promise you won’t like –”

Merely a stunned observer, Leta was frozen against the railing as she watched the three of them approach down the hallway without sparing her a look. It occurred to her as their conversation continued (“I don’t know, Cy-cy, we are still alive,“ Corra was saying now), that they were going to stride right past her lest she wave her arms and yell.

The realization caused a sort of sudden anger in her chest. Anger she did not she even possessed. Gritting her teeth, she pushed herself away from the railing and forced herself in front of them. The trio awkwardly stumbled to a stop before her like dominos as she glared at each of them, most especially at Fiearius.

“You need treatment,” she growled. She ignored their stunned looks. “And I need off this ship.” 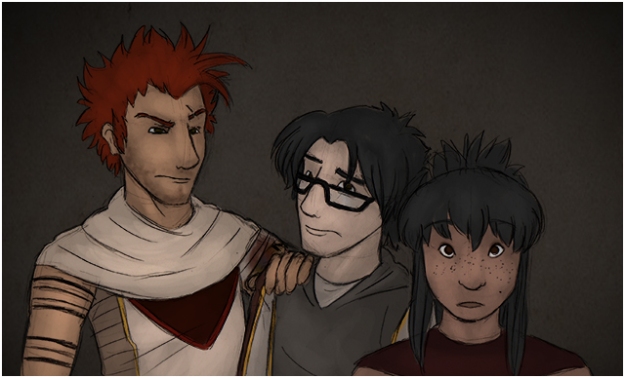