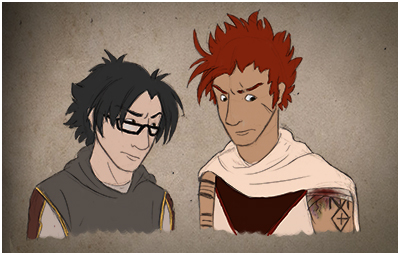 The look Fiearius gave him in return was even more out of place. It was as if he didn’t even recognize him for a moment. His pupils were wide and fuzzy and he appeared less angry now than just plain confused. Though only missing a few beats, he finally managed to yell back, “Nothing! What the fuck are you doing?” though a little half-heartedly. He then turned back towards the house and shouted, “Get the goods and let’s go, now!” Without hesitation, he’d hit the cowering merchant with the butt of his gun, clomped down the stairs and made for the street. “Let’s get the hell out of here.”

Fiearius had then gone through a great deal of trouble to pretend that nothing had happened, but it was a flimsy mask to say the least. However, Cyrus had been willing to perhaps overlook it had not the condition gotten slowly worse. Over the next two days, more than once, Fiearius had been subject to random bursts of emotion before apparently feeling faint and storming away before anyone could do anything. This morning, however, having found his brother talking to himself alone in the bridge of the ship for a good twenty minutes, switching between uncontrollable laughter and incalculable anger every couple seconds, Cyrus decided it was time to actually do something about it. Delirium, he was pretty sure, was a bad sign, even for someone as volatile as Fiear.

It didn’t take long for Cyrus to figure out what the problem was, after confronting his surprisingly accommodating patient. Fiearius had even admitted that he wasn’t feeling well, though that admission had been delivered in the form of a tortured laugh. Just one touch of his skin told the story and it was a story of an unbelievably high fever. The story behind that wasn’t too hard to figure either, once Cyrus managed to unwrap the bandages on his brother’s arm, revealing the purple and green, swelled, veiny mess of a very infected wound, the likes of which had spread from the simple gunshot Cyrus had forgotten about, all the way down his arm. He pointed out that he needed to see a doctor immediately. Fiearius just laughed and said, “It’s okay, little brother, I’ve been to the circus before, I know.” Which was when Cyrus decided it was time to take helm of the ship.

And now, who knew if Fiearius was even up for flying her? But if the low rumble of the ship’s walls was any indication, they would soon find out.

In the hallway, as he hurried toward the staircase, he mercifully intercepted Corra, who was walking (much less worriedly than he) in the opposite direction.

“Corra,” he said, catching her arm, “can you help the doctor here with the passenger seats? Or, I don’t care what you do, survive take off. Figure it out. I have to go before he pushes her into critical revolution just to piss me off.” Grumbling under his breath, he turned towards the stairs down to the engine room and ran off.

Corra. Yes, that was her name. This was the same girl from the ramp. Names and faces were coming a bit easier to Leta now that some of her shock was wearing off, although she still felt like she was being led through some kind of twisted circus show, meeting the various performers along the way.

But this girl, at least, had on a friendly face. She was a head shorter, but built in a way that suggested boyish strength. Her black hair was tied back in an unkempt bun, her dark skin sprinkled with darker freckles. Although Cyrus and other crew members were shooting off in urgency, Corra seemed nothing but relaxed and casual. In fact, she smiled broadly and stuck out her hand.  “Corra. Chief arms master. You’re the doctor right? What’s your name? Probably not a bad thing, having a medic around. Considering how much we seem to get shot at.”